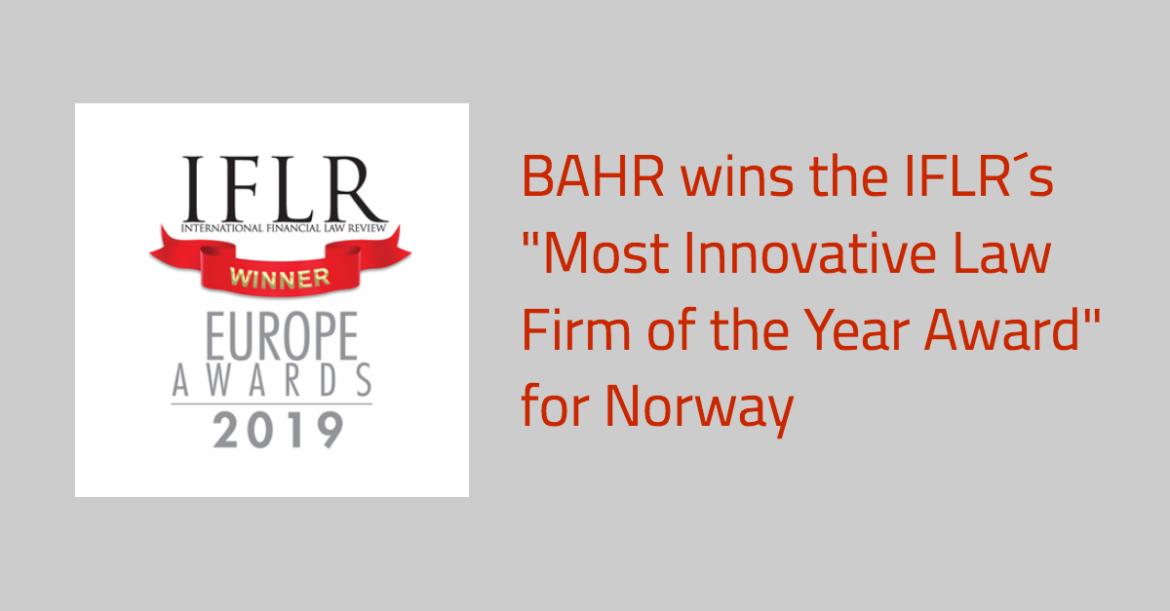 These prestigious annual awards recognise the most innovative firms and complex deals in Europe over the past twelve months.

The Most Innovative National Firm of the Year Award, meanwhile, recognises in particular the firms with the best track record in 2018 in giving local law advice on the most innovative international corporate finance transactions in respective jurisdictions.

BAHR was also shortlisted for the “IFLR Equity Deals of the Year – Structured finance and securitisation” for  the restructuring of the Seadrill Group. The restructuring of UK headquartered Seadrill took almost two-and-a-half years to complete. The case involved 44 international banks and financial institutions holding over $8 billion of debt across 13 syndicated credit facilities (12 of which were governed by Norwegian law). This debt structure and stakeholder complexity was unprecedented for the Norwegian market. The case involved a Chapter 11 court led restructuring process in Houston, which tackled total debts exceeding $14 billion spanning secured credit facilities, financial leases, Nordic and US high yield bonds, claims from ship yards, derivative claims and other claims. The restructuring involved assets in over 20 jurisdictions and three listed companies. The process involved the creation of a unique ring-fenced corporate structure that split the group into two independently financed sister groups (one financed by existing bank debt and the other by new notes). Each group was subject to separate covenant requirements. The new notes also had the benefit of collateral and covenant protections in the holding structure of the two ring-fenced groups.

IFLR is the market-leading financial law publication for lawyers in financial institutions, corporates and private practice and offers insight on the latest deal structures and regulatory developments worldwide. IFLR currently covers over 120 jurisdictions and bases its annual rankings on marked analysis and interviews with clients.