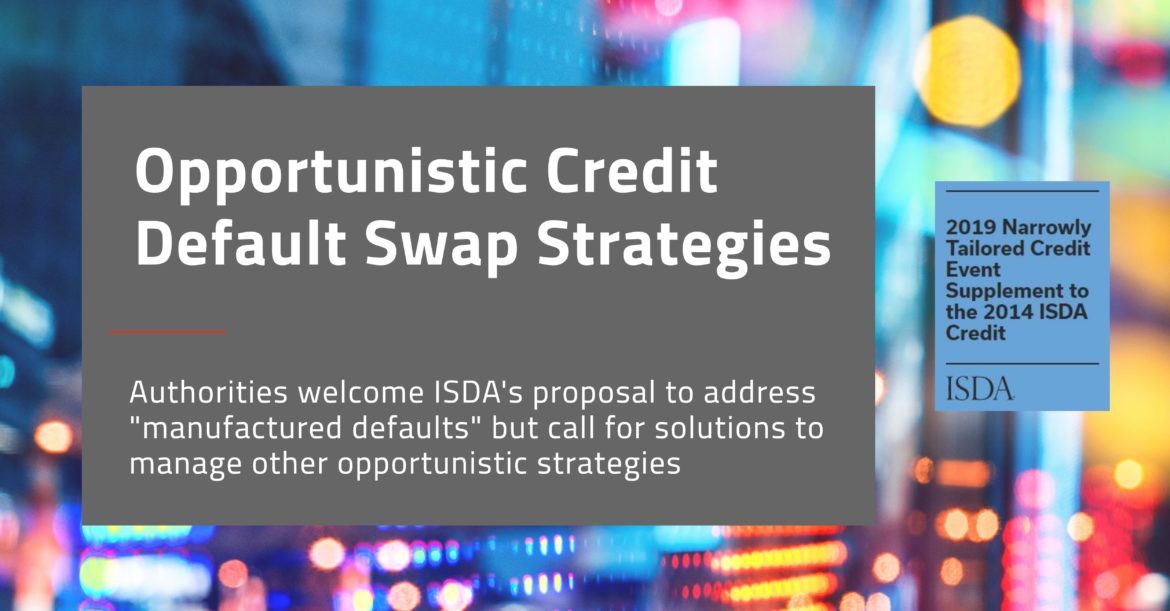 Since the 2008 financial crisis, there have been multiple high-profile legal fights relating to so-called “manufactured defaults” – arrangements between buyers of Credit Default Swaps (“CDSs”) and debtors of the underlying debt obligations whereby the debtor agrees to default on its obligations in a way that triggers payment under the CDS. These cases have caused an uproar among both regulators and participants in the CDS market and have been labelled by many as (close to) market manipulation. As a response, ISDA published a supplement to its 2014 Credit Derivatives Definitions which aims to prevent such manufactured default by restricting the pay-outs under CDSs to payment failures relating to a deterioration of the debtor’s financial condition. Market participants may amend their outstanding transactions by adhering to ISDA’s protocol by 14 October 2019.

ISDA published its 2019 Narrowly Tailored Credit Event Supplement (the “NTCE Supplement”) to the 2014 ISDA Credit Derivatives Definitions on 15 July. The NCTE Supplement seeks to address some of the concerns raised by market participants and regulators regarding opportunistic credit default strategies involving manufactured defaults (referred to by ISDA as Narrowly Tailored Credit Events). Opportunistic strategies in the CDS market, pioneered in many cases by large hedge funds, have affected the credibility of the credit derivatives market in recent years. Some of the more well-known cases involving the manufactured default strategy are perhaps those involving U.S. homebuilder Hovanian and Spanish gaming company Codere.

The manufactured default strategy is often carried out by the hedge fund agreeing to extend favourable financing to the debtor in exchange of the debtor carefully triggering a Failure to Pay credit event under the hedge fund’s CDS transactions in a manner which avoids any actual defaults or cross-defaults under its debt obligations. Because most standardised CDSs have a relatively low failure to pay threshold of USD 1 million and thresholds under financing agreements are much higher, debtors are often able to trigger a credit event under a CDS without triggering default thresholds across its capital structure.

In order to prevent such manufactured defaults the NTCE Supplement introduces an additional condition regarding credit deterioration of the Relevant Entity (the debtor) in order to trigger the Failure to Pay credit event. This means that a failure to pay will not constitute a credit event under the CDS if it “does not directly or indirectly either result from, or result in, a deterioration in the creditworthiness or financial condition of the Reference Entity”. To assist in the determination of whether a non-payment results from or results in a credit deterioration, the NTCE Supplement includes guidance notes which sets out non-exhaustive lists of factors that may indicate whether the credit deterioration requirement has been satisfied or not.

The requirement for a deterioration in creditworthiness or financial condition as set out in the NTCE Supplement has been contentious because of its element of discretion. However, market participants seem to agree that since the objective test in its current form has to some degree encouraged un-wanted behaviour capable of damaging the trust and effectiveness, the uncertainty created by the new provisions is a necessary price to pay for a well-functioning market.

The terms of the NTCE Supplement is expected to apply to all standard corporate debt CDSs entered into after the implementation date 13 January 2020, as well as being incorporated into existing transactions between parties adhering to the ISDA 2019 NTCE Protocol before 14 October 2019. Cleared transactions will be subject to the new provisions through CCPs’ amendments of their rulebooks.

Although the NTCE Supplement may be an important step in protecting the integrity of the CDS market, the proposed amendments only addresses manufactured defaults and will not solve concerns relating to other strategies. E.g., the strategy claimed to be used in the case of Norske Skog AS where it was alleged that parties which had sold CDSs tried to postpone any defaults until their CDSs had expired, collecting large premiums and avoiding any pay-outs.

The U.K. FCA, the U.S. CFTC and the U.S. SEC issued a statement on 19 September 2019 raising continued concerns about opportunistic trading strategies in addition to manufactured default. However the authorities did welcome the efforts made by ISDA and stated an expectation that firms did “consider how […] opportunistic strategies may impact their businesses and to take appropriate action to mitigate market, reputation and other risks arising from these types of strategies. With regard to the proposed ISDA protocol, firms should consider how adherence to the proposed ISDA protocol may help them mitigate these risks. Firms should also consider the risks to which they may be exposing themselves by trading with counter-parties who do not adhere to the proposed ISDA protocol.”