On 31 August 2021, the Government announced that they will introduce a cash-based petroleum tax system. If resolved, the proposal may have significant impact on the oil and gas industry in Norway. In addition to increasing the risks involved in the petroleum business in general, it may also increase the costs related to termination of existing facilities unless the company has other income generating assets. 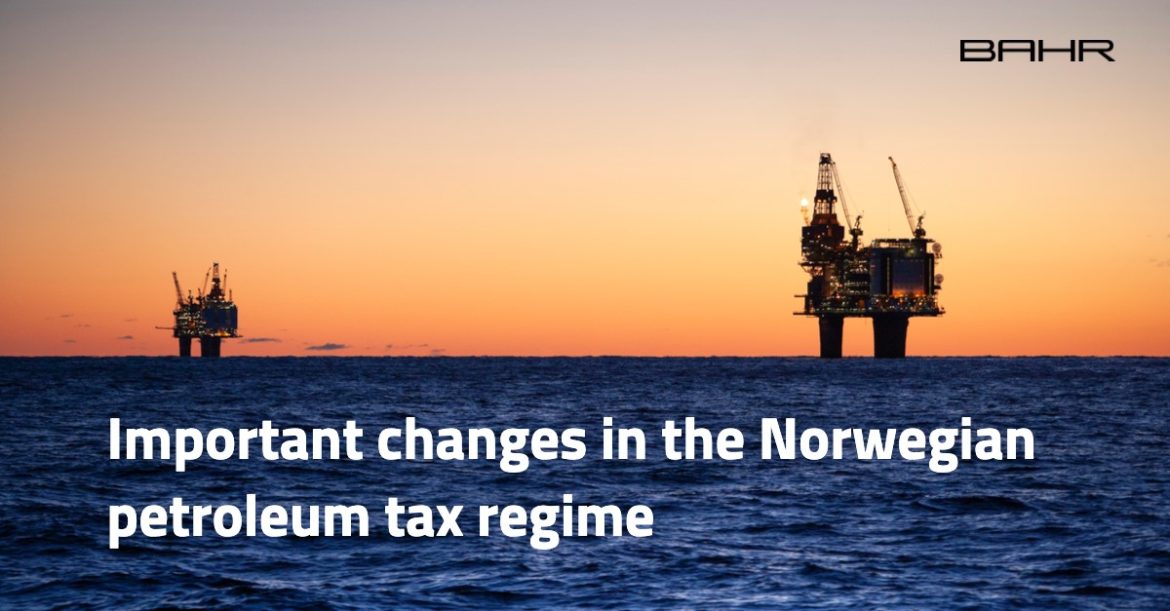 The petroleum companies are as a rule entitled to depreciations of upstream investments over six years (linear) with a tax value of 78%, Such investments will initiate an additional tax deduction, uplift, in the special tax base (tax rate of 56%). The objective of the uplift is to inter alia compensate that the companies are not entitled to an immediate tax deduction of their investments in the special tax base. It has been a long going discussion if the level of the uplift is reflecting the real economic cost of the delayed tax deduction. The Government believes the uplift has been too high, whereas the industry believes the uplift has been too low. The answer depends on the discount rate to be used in the calculation.

Temporary changes
In 2020, the Government introduced temporary tax rules to counter the effect of Covid-19 and the rapid fall in oil and gas prices. An important measure was to allow immediate deduction of investment costs and an increased uplift rate in the special tax base (tax rate of 56%). The temporary changes applied to all investments made in 2020 and 2021, and will also apply for qualified investments in later years. The main effect of the temporary changes is that the petroleum companies will reduce their tax payments in the short run due to the immediate deduction for investments, but will increase their tax payments in later years where there are no deductions.

The proposal
On 31 August 2021, the Government announced that they will introduce a cash-based system for the special tax (56%) of the petroleum tax. The main elements of the proposal are the following:

Tax treatment of future investment costs in the ordinary tax base will not be comprised by the immediate deduction or the annual refund of losses. Since nothing has been said about these rules, we assume that the proposal will not include any changes to the current depreciation rules in the corporate tax base.

The effect of the proposal
The economic effect of the Governmental proposal is dependent on the discount rate to be used to value future tax deductions under the current tax system. Based on the Government opinion on the discount rate being equal to the long-term risk-free interest rate, the proposal would almost double the effective portion of investment costs to be covered by the petroleum companies, from approximately 12% to approximately 22%. However, if the correct discount rate is higher than the risk-free interest rate, as argued by the petroleum companies, the economic effect of the proposal will be reduced.

The petroleum tax act also has several special rules regarding inter alia the possibility to off-set part of the losses from the non-offshore activities in the corporate tax base of the petroleum tax. Whether these rules will be maintained are uncertain, and may potentially have significant impact on non-offshore projects carried out by petroleum companies, such as future offshore wind investments and carbon capture projects such as Northern Lights.

The risk involved in the petroleum industry will in any event increase if the proposal is resolved. Currently, the petroleum companies have full certainty that the Government will cover at least 78% of the nominal costs (such as exploration and decommissioning costs) and up to 89.6 % of the nominal investments. Under the new proposal, the companies will only be secured that the Government will cover 71.8% of both costs and investments. This may be particularly burdensome for companies involved in removal and decommissioning of existing installations and fields, where the income has stopped and only costs are remaining.

The proposal will also increase the tax incentives for transactions on the Norwegian Continental Shelf. The difference between companies being in tax-paying position and companies in a loss-making situation will increase since the cash-flow tax only comprise the special tax base and not the complete petroleum tax. Previously, it has been a goal to reduce such changes, but this seems to no longer be the case. This will likely impact on the number of active companies and reduce the level of competition and invention on the NCS.

Deduction for interest costs are not discussed, but we assume that the current rules will be continued. However, since the tax assets will be deducted immediately in the special tax basis, the allocation of interest expenses to the special tax regime will be reduced to almost zero within a few years.

What’s next?
It is not surprising that the petroleum tax regime will be shifted to a cash-based tax system, meaning that investment costs are fully deductible in the special tax base in the year of investment. Such model was introduced with effect for the hydroelectric power production sector in 2021.

However, the timing of the proposal shortly before the election was surprising. The new rules are suggested to be implemented from 1 January 2022 giving very little time for consideration and discussion of such important long-term changes.

A consultation paper is assumed to be published shortly. The final proposal will probably be announced later this year and will be discussed by the new Parliament to be elected 13 September 2021. Although it is difficult to say for sure, we believe there will be political support for the main elements of the proposal, but expect that some elements are adjusted in the final rules.