Norway to implement the EU STS framework for synthetic securitisation 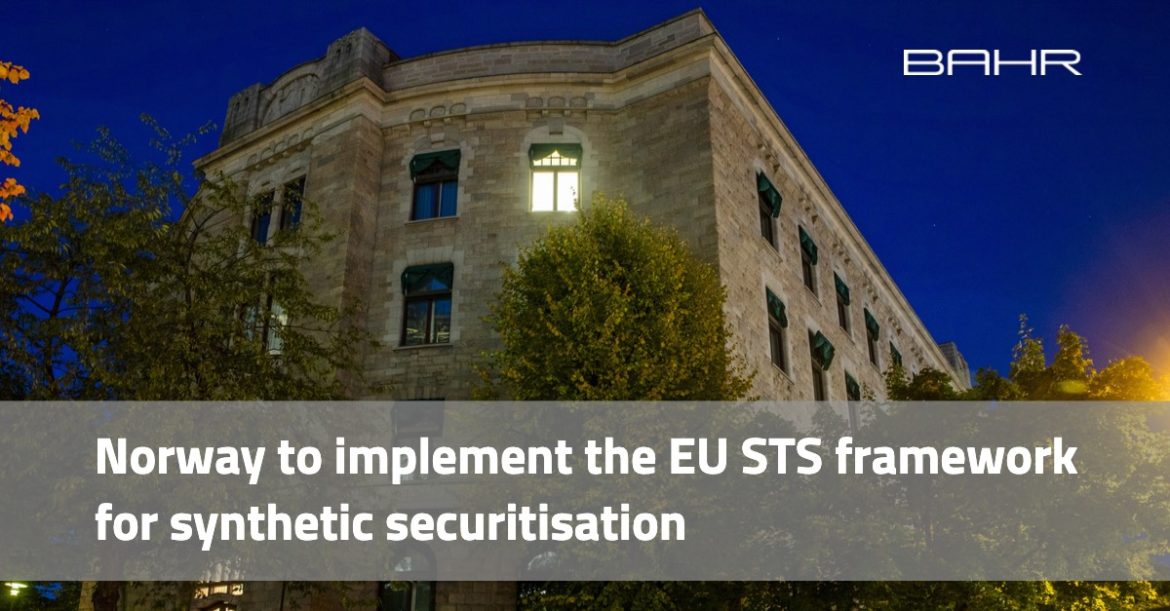 The purpose of the STS framework is to move away from the very complex and opaque securitisations that fuelled excessive risk-taking and magnified the subprime mortgage crisis in 2008-2009. As the name implies, the criteria for attaining the STS label seek to make the securitisation more simple, transparent and standardised and thereby making it easier for investors to assess and adequately price the risk of their investment. In brief, the potential benefits of an ‘STS securitisation designation’ can be summarized as follows:

In addition to the introduction of an STS framework for synthetic securitisations, the Amending Regulations make certain amendments in respect of securitisation of non-performing exposures (NPEs). The Amending Regulations seek to make it easier and more attractive for market participants to securitise NPEs, acknowledging the fact that securitisation is an efficient tool in managing portfolios of NPEs. This is particularly relevant in the wake of the COVID-19 crisis, which is expected to result in an increase of NPEs on European banks’ balance sheets.

As explained in our previous newsletter published on 8 December 2020, the transfer of loans to the Securitisation Special Purpose Entity (SSPE) as part of a true sale securitisation will be fully exempt from the requirement in Section 45 of the Financial Contracts Act to obtain the debtor’s prior consent to any transfer. In the Consultation Paper the FSAN proposes to introduce a requirement for tacit consent by the debtor prior to transfer of a defaulted loan to the SSPE. Specifically, the proposal entails that the debtor may refuse the transfer of a defaulted loan within a period of minimum three weeks following receipt of notice of the transfer. The rationale offered by the FSAN for special treatment of defaulted exposures is that the debtors will be in a particularly vulnerable position and that the transfer of such exposures to an SSPE may affect the debt collection process to the detriment of the debtor. In BAHR’s view, the FSAN’s proposal is slightly surprising and could lead to unforeseen consequences.  Firstly, the legislator has previously considered whether there is a need for the debtors’ consent when securitising loans and decided against it on the basis that (i) the debtors will keep all of their existing rights, (ii) the servicer will be a regulated financial institution, (iii) such requirement could reduce the feasibility of securitisation, and (iv) the debtors are entitled to receive information about the securitisation prior to closing. It is difficult to see any weighty arguments in favour of treating defaulted loans any different. Secondly, the term ‘defaulted loans’ has not been more closely defined in the legislative proposal, leaving the question open whether a tacit consent is required only in the context of an NPE securitisation or if it would extend to any securitisation where one or more of the underlying exposures are in default at the time of transfer. If the latter interpretation is correct, this could potentially create some issues in relation to securitisation of loans which are performing at the relevant pool selection cut-off date and which subsequently go into default prior to the closing date.

The FSAN’s proposal is subject to a consultation period ending on 29 October 2021, following which the Ministry of Finance will publish a proposal for legislative amendments. The amending legislation could potentially be passed as early as this fall, or alternatively during the spring of 2022.