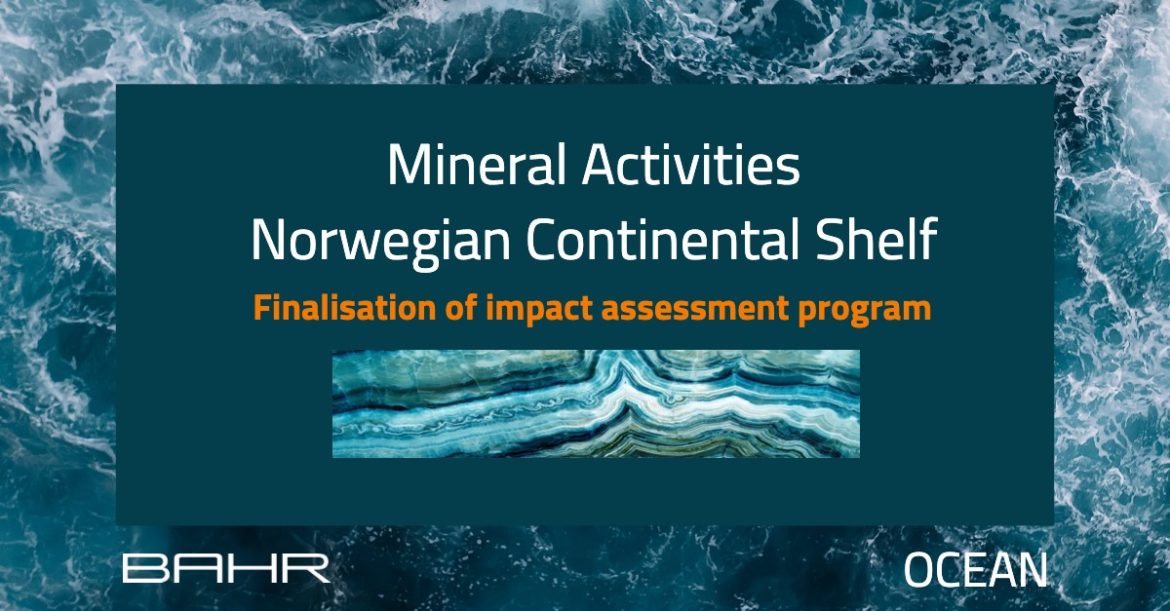 Throughout Norwegian history, the ocean resources have been essential for building wealth, industry and welfare. Norway is now about to start what can be the next chapter in its marine history: Mining of seabed minerals. Analysis of samples collected by the Norwegian Petroleum Directorate have revealed that sulphides and manganese crusts from the Norwegian shelf contain high content of inter alia copper, zinc and cobalt¹. These metals may be used for the production of wind turbines, solar panels and batteries, which are important for reducing greenhouse gas emissions. In addition, such metals are used in high-tech products such as mobile phones and computers. The demand for these metals is increasing, and forecasts show that the demand only partially can be met with existing and new land-based mines. Extraction of seabed minerals can help ensure the required supply of metals, and thus be an important industry for Norway in the future.

The exploration and extraction process

Before a license to conduct mineral activities in a specific area can be granted to a commercial player, the Act stipulates that the area must – as main rule – be subject to an opening decision by the government, which shall be based on an impact assessment. A similar process is well-known from the petroleum industry. The impact assessment shall highlight which effects a potential opening could have for the environment, as well as the expected impact on business, economic and social factors.

A non-exclusive survey license is granted for a specific area and with a duration of up to five years, and applies to exploration for and mapping of mineral deposits for commercial purposes. The license may be granted to both Norwegian and non-Norwegian entities. In the preparatory works to the Act, MPE proposes that the licensee acquires a time-limited exclusivity to the data collected. The licensee may thus sell the data or use it in a subsequent competition for the award of an extraction license. However, the survey license does not give the licensee priority in the award of a subsequent extraction license.

If an extraction licence is shared among multiple licensees, the MPE appoints one of them as operator. The MPE may – as is the case for petroleum extraction licenses – make the license conditional upon the licences entering into an agreement for with a specific content that regulate the cooperation.

Chapter 5 of the Act contains regulations on cessation of activity. The chapter is largely based on the corresponding chapter in the Norwegian Petroleum Act. The Act stipulates inter alia that the licensee is obliged to ensure prudent clean-up after the activities have ended, and that the licensee shall present a decommissioning plan to the MPE no later than two years before a licence expires or is surrendered.

We expect to see an increased focus on the potential in mining of seabed minerals the coming years – in parallel with technological developments and the impact assessment being carried out.

Activities in relation to mining of seabed minerals are expected to be highly relevant for several players currently being engaged in other ocean activities, including companies being involved in petroleum activities and related industries, such as shipping, offshore and service industries – as well as new companies positioning themselves for this new adventure. We also expect to see various forms of collaborations between companies within this field – as we see i.a. in both the petroleum and offshore wind industries. The seabed mining business will be asset heavy, and both the assets and the exploration and extraction activities will require financing.

BAHR is following the process of opening the Norwegian continental shelf for mineral activities closely, including the regulatory framework governing these activities. As the exploration and extraction process is moving forward, we expect an increased need for legal assistance in this area. We have extensive experience from advising also on the corresponding framework regulating petroleum activities. We further have extensive experience providing advice to petroleum related industries such as shipping, offshore and the service industry, which are expected to play a key role in the development of the seabed mining business, as well as related financing.

BAHR is top-ranked in international ratings such as Chambers and Legal500 within relevant areas, such as Oil&Gas, Shipping and Financing.