Escalation clauses (or multi-tiered dispute resolution clauses): Is it for the arbitral tribunal alone to determine compliance with contractual conditions precedent to arbitration, or the courts? Read more in our summer newsletter. 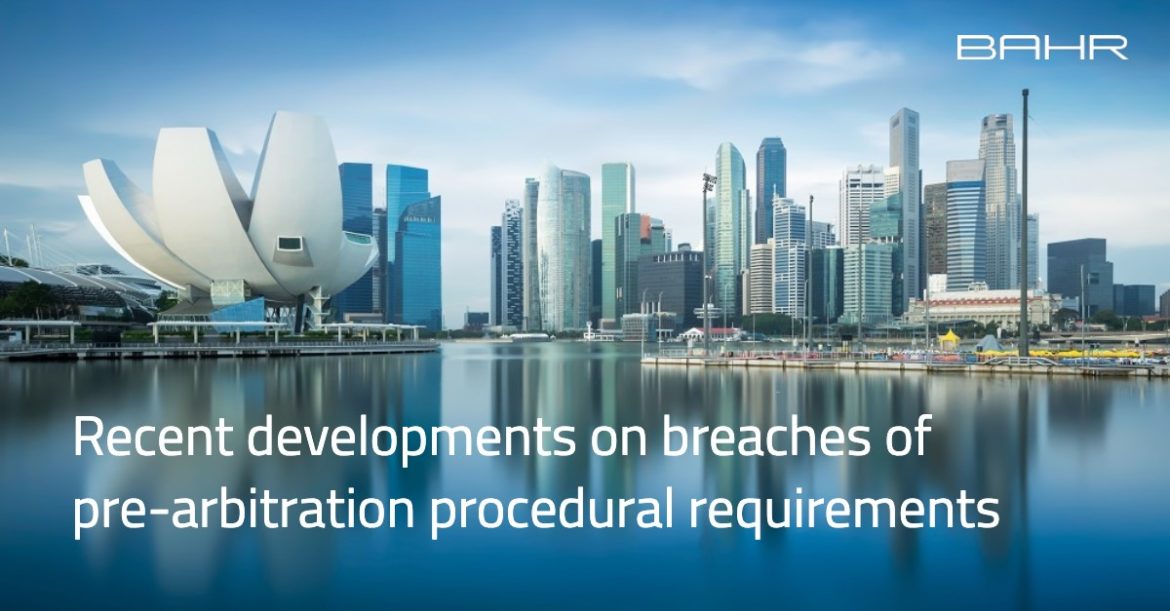 The approach to alleged breaches of pre-arbitration procedural requirements has recently been developed further by the courts in important arbitration hubs, London, Hong Kong and Singapore. The recent approach establishes such breaches as the domain of arbitral tribunals alone and no grounds for setting aside arbitral awards. In this newsletter we consider the decisions and their possible implications on the Norwegian law position as well as how the issue should be approached in practice going forward.

A key issue arising from escalation clauses is whether a breach can lead to the setting aside of an arbitration award, if the arbitration award has been handed down regardless of the breach? Put differently; is it for the arbitral tribunal alone to determine whether an escalation clause has been breached or may the ordinary courts consider the issue as grounds for setting an award aside? In a string of recent decisions, this question has been heard by domestic courts in Singapore, London and Hong Kong.

In the Republic of Sierra Leone v SL Mining Ltd. [2021] EWHC 286 (Comm) the arbitration agreement included an escalation clause whereby the parties, before requesting arbitration, were to “in good faith endeavour to reach an amicable settlement” within a cooling-off period of 3 months from written notice of dispute. However, the claimant commenced arbitration by a request for arbitration 1 ½ months after the notice of dispute. The defendant challenged the award pursuant to section 67 of the English Arbitration Act 1996. The challenge was made on the grounds that the request for arbitration had been premature, leaving the arbitral tribunal without substantive jurisdiction.

Following a thorough analysis of academic writings on international arbitration and decisions from other jurisdictions (the US, Singapore and the UNICITRAL Tribunal), the High Court concluded that there was overwhelming support for the view that premature commencement of arbitration is a matter of admissibility, not jurisdiction. On further analysis, the High Court concluded that the English law position reflects the same, and that a claim in arbitration being made prematurely provides no grounds for a challenge under section 67 of the English Arbitration Act 1996.

In C v D [2021] HKCFI 1474, the arbitration agreement included an escalation clause whereby, as a condition for commencing arbitration, a party had to request in writing the negotiation of a dispute. If no amicable solution was found within 60 business days of the request, the parties could commence arbitration. After a partial award the defendant argued that the claimant had not fulfilled the notice requirement in the arbitration agreement and sought an order from the High Court of Hong Kong to set aside the award pursuant to section 81 of the Hong Kong Arbitration Ordinance (incorporating Article 34 of the UNICITRAL Model Law).

Like the English High Court, the Hong Kong court considered whether the notice of negotiation requirement was a matter of jurisdiction or admissibility. And again, like the English High Court (and indeed in reliance on it) the court concluded that the matter was one of admissibility, not jurisdiction, and dismissed the application to set the award aside.

In Norway, an alleged breach of an escalation clause as grounds for setting aside an award pursuant to section 43 of the Norwegian Arbitration Act was heard by the Norwegian Court of Appeal (Borgarting division) in 2018 in Jet-Tern Marine Limited Co. v Maple Leaf Adventures Co. (LB-2016-190180).

In that case it was alleged that a pre-arbitration requirement to have the dispute negotiated by a marine surveyor, had not been fulfilled. Similar to English case law pre-2018, the Norwegian Court of Appeal did not consider the distinction between jurisdiction and admissibility (nor was it argued by the parties). Rather jurisdiction, within the meaning of section 43, was assumed, but the application nonetheless dismissed because the defendant in the arbitration had objected to the arbitral tribunal’s jurisdiction too late, cf. section 18(3) of the Norwegian Arbitration Act.

From our practice, we see that multi-tiered dispute resolution provisions are gaining traction. In particular in terms of pre-arbitration negotiation and mediation efforts. As mechanisms for facilitating settlements, they may lead to the parties’ saving of time and costs, and the preservation of commercial relationships – especially if the clauses are drafted with care. On the other hand, the cases we have discussed above, illustrate that multi-tiered dispute resolution provisions also could add another layer of complexity and may lead to complications. Regardless of whether such provisions are included in the arbitration agreement between the parties, it is important to bear in mind that negotiations and dialogue usually bring the parties closer together – even if the situation seems deadlocked. All legal concepts and technicalities aside, the cases discussed above underline the importance of objecting to the arbitral tribunal at the first possibility if a pre-arbitration requirement has been breached and ensuring that the issue is fully argued before the tribunal if need be. The courts are unlikely to provide any help.