On 18 December 2022, agreement was reached on amendments to the EU Emissions Trading System (ETS). Maritime transport is now agreed to be included in the ETS. 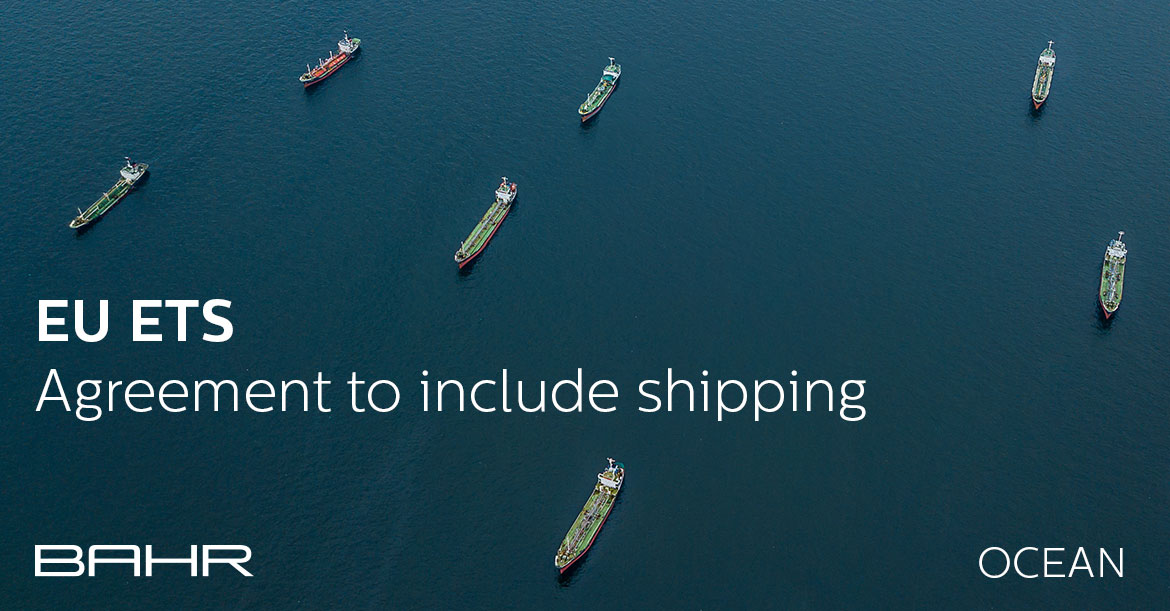 The ETS will cover both CO2 (carbon dioxide), CH4 (methane) and N2O (nitrous oxide) emissions, the two latter from 2026.

The amendments to the ETS is part of the “Fit for 55 Package” – the legislative proposals from the EU to reach the emission targets of reducing greenhouse gas emissions in 2030 to at least 55% compared to 1990 levels.

Relevant stakeholders should consider how the ETS requirements should be implemented in charter contracts and other agreements. BIMCO has published an emission trading scheme allowances clause for time charter parties.

The European Green Deal and “Fit for 55 Package”

The EU has set an ambition to be climate-neutral by 2050 – an economy with net-zero greenhouse gas emissions. This objective is at the heart of the “European Green Deal” and in line with the EU’s commitment to global climate action under the Paris Agreement. The European Green Deal was presented by the European Commission December 2019.

In order to reach such target – the European Commission has considered actions required across all sectors – which has led to legislative proposals presented on 14 July 2021. The proposals presented included amendments to the ETS, including extending the ETS to cover also maritime transport.

In the agreement reached on 18 December 2022, maritime transport is agreed to be included in the ETS. There are amendments to the agreed regulation compared to the proposal presented by the European Commission.

The EU Emissions Trading System (ETS) sets an absolute limit or ‘cap’ on the total amount of certain greenhouse gases that can be emitted each year by the entities covered by the system. This cap is reduced over time resulting in a reduction of total emissions.

Entities buy or receive emissions allowances within the limit. The limit on the total number of allowances available ensures that they have a value. The trading is intended to bring flexibility to ensure emissions are cut where the cost is lowest.

The scope of the ETS is extended to cover the maritime sector.

Shipping companies will have to purchase and surrender ETS emission allowances for each tonne of reported CO2 emissions.

The ETS will be extended to include emissions from all vessels of 5 000 gross tonnage or above regardless of their flag.

This will include also offshore vessels from 2027, which is an extension compared to the proposal from the European Commission.

In 2026 it will be considered whether to include also general cargo vessels and offshore vessels between 400 and 5 000 gross tonnage in the ETS. Such vessels will be included in the MRV regulation from 2025.

Effective from 2024 – with phase in period

ETS will be gradually extended to include the maritime sector over the period 2024 to 2026. Shipping companies will have to surrender allowances for a portion of their emissions during an initial phase-in period, reaching 100% after two years.

The phase-in requirements to surrender allowances are as follows:

– 100 % of verified emissions reported for 2026 and each year thereafter

The entity responsible for the compliance with the ETS is the “shipping company”, defined as the shipowner or any other organisation or person, such as the manager or the bareboat charterer, that has assumed the responsibility for the operation of the ship from the shipowner and that, on assuming such responsibility, has agreed to take over all the duties and responsibilities imposed by the International Management Code for the Safe Operation of Ships and for Pollution Prevention.

Shipping companies will be subject to an administering authority of a Member State that will ensure compliance using the same rules as for the other sectors under the ETS. There are regulations on penalties and ships can also be denied entry to EU ports where the responsible shipping company has failed to surrender the necessary allowances for two or more consecutive years.

There will be a reporting and review clause to monitor the implementation of the rules applicable to the maritime sector and to take account of relevant developments at the level of the International Maritime Organization.

BIMCO has published an emission trading scheme allowances clause for time charter parties. The purpose of the clause is to allocate costs and responsibilities for obtaining, transferring, and surrendering greenhouse gas emissions allowances for ships operating under an emissions scheme, such as the ETS. The basis of the clause is that the party providing and paying for the fuel under the time charter is the party that is responsible for providing and paying for emissions trading allowances. The owners must monitor the ship’s emissions and provide the relevant emissions data and the basis of calculations to the charterers. Using this information, the charterers transfer the appropriate allowances to the owners monthly. The clause addresses the adjustment of allowances due to off-hire events and what happens if the charterers fail to transfer allowances when due.

There is a high focus on reduction of emissions in shipping both globally and locally.

The “Fit for 55” package and inclusion of maritime transport under the ETS is an example on this.

The European Parliament and European Council will have to formally approve the agreement before the new law can come into force. This is however considered to be a formality only.

It is important that relevant stakeholders, including owners and charterers, take into consideration the new regulation, as well as contemplated future amendments and requirements with respect to emission reduction from shipping generally and the ETS specifically, when entering into contracts.