Compliance | Update on US, EU, UK, and Norwegian sanctions against Russia

In this newsletter, we provide the reader with a high-level update on sanctions and countersanctions implemented since 14 March 2022. In addition, we offer practical advice relevant to companies with investment exposure to Russia through the 1995 Norway - Russian Federation Bilateral Investment Treaty. 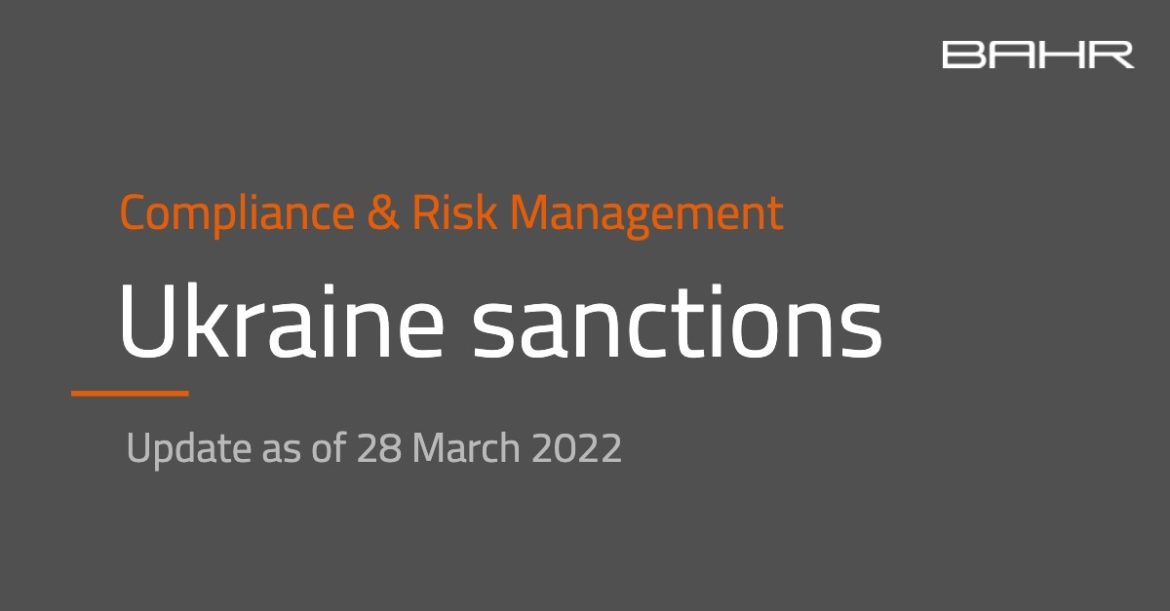 Norway implemented almost all of the EU’s sanction regime into Norwegian law on 18 March 2022. However, the Norwegian implementation diverged from EU sanctions in that the Russian governmental news outlets Russia Today and Sputnik were not sanctioned.

In addition, the following additions were made to the EU Sanction Lists:

With these additions, the EU Sanction List now comprises a total of 877 individuals and 62 entities.

Under the powers of Executive Order 14024, US President Joe Biden placed 11 individuals on the Specially Designated Nationals and Blocked Persons (the SDN List). These individuals include:

The US announced the formation of the Russian Elites, Proxies, and Oligarchs (REPO) Taskforce along with its key allies. According to statements made by the US Treasury Department, Taskforce REPO will prioritise finding, freezing, and seizing (if applicable) assets of individuals and entities involved with the Russian invasion of Ukraine.

18 March 2022 – OFAC issues General License no. 24 authorising certain transactions related to the provision of Maritime Services regarding Luhansk and Donetsk

OFAC issued the General License no. 24 on 18 March 2022, where transactions regarding the provision of civil maritime services performed by individuals resident in the Donetsk or Luhansk regions  that would otherwise be prohibited are authorised on, inter alia, the following conditions:

24 March 2022 – Sanctions against members of the Duma, the Duma itself, the Russian arms industry, and the Russian financial sector

On 24 March, the US announced a new comprehensive set of updates to its sanctions regime. According to statements from the US State Department, the purpose was to align US sanctions with the sanction regimes of key allies, including the EU, UK, and Canada.

Some important developments are:

Two significant changes were made to the UK legislation on 15 March 2022:

These legislative amendments will allow more varied sanctions and are part of a broader package to tackle illicit finance.

In addition, the UK Government announced the following new sanctions:

In addition, the UK revoked the Russian status as a Most Favoured Nation (MFN) under the WTO and GATT94 agreements. Certain Russian goods like vodka now face an additional 35% import tariff.

On 24 March, the UK announced 65 new listings on sanctions lists, mainly targeting Russian industries, banks, and Russian business people, which the UK Government has described as being vital to “Putin’s war machine”. These sanctions were implemented through asset freezes and travel bans.

Some of the newly sanctioned individuals and entities are:

The Russian response to the Western sanctions consists of a number of Presidental edicts, interpretative guidelines from financial regulatory bodies, and legislative acts. Below are some of the measures we consider as most significant for foreigners subject to Russian jurisdiction. In addition to  the legal implications of such countersanctions, we also recommend to review the enforceability of such measures outside of Russia and Russian-friendly countries. Territorial reach and other mechanisms, such as investments treaties, may limit the impact to some extent.

In addition, some proposed Russian Countersanctions are

Following signals from key decision-makers, we expect new sanctions against Russia until a political solution is in place. For that reason, any adaptations to the current sanctions regime risk being outdated in a relatively short period of time. In this regard, we refer to our previous newsletter, where we offered practical advice on how companies can mitigate and adapt to the new sanction risk landscape.

For companies that have experienced losses on their investments in Russia and/or Ukraine, questions may eventually arise about the possibility of recouping these losses. As we mentioned in our last newsletter, Bilateral Investment Treaties (“BITs”) offer investors comprehensive protection against unjustified governmental interferences, such as uncompensated expropriation and nationalisation, restrictions on the transfer of funds and the repatriation of profits, damages due to war and similar events, discrimination, and arbitrariness. We view the Russian countersanctions as potentially violating many BIT protection standards.

BITs protect investors through ISDS (Investor-state dispute settlement) treaty provisions, where host states, by acceding to the BITs, offer their consent to arbitrate in cases where investors consider there to be a breach of investment treaty standards. Arbitral awards under investor-state dispute settlement procedures will be binding upon the parties, and in cases of non-compliance can be enforced under the ICSID Convention and/or the New York Convention.

Russia has entered into BITs with countries such as Norway, Austria, Belgium/Luxembourg, Canada, Denmark, Finland, Germany, Hungary, Italy, Japan, Spain, Sweden, Switzerland, the Netherlands, Ukraine, and the United Kingdom. In addition, through a re-domiciliation, it is also possible to obtain access to investment treaty arbitration if the investment was initially made from a country without a BIT with Russia.

While likely not an immediate concern, in due course the position under BITs  should be determined, and could be used on a stand-alone basis, or as a defensive basis, if met with claims based on Russian law. Enforcement in Russia would likely not be straightforward – enforcement against Russian state assets abroad would be the practical remedy.

How can BAHR support you?

An effective compliance programme is key for being able to navigate the increasingly complex sanctions and trade restrictions. At BAHR, we regularly assist our clients with establishing, assessing and further developing their compliance programmes, and handling day-to-day compliance challenges. We regularly advise clients on trade sanctions and export control in Norway and the EU, and cooperate with local counsel in other jurisdictions, notably the United States,  where need arises. We can also assist you with assessing your contracts and engagements in light of both sanctions risks as well as potential remedies to address such risks.

Feel free to contact us for assistance or an informal conversation on this topic.

Disclaimer: This newsletter comprises only general information on selected trade sanctions and export control laws and regulations in Norway, the EU, UK and US and is not exhaustive and may be updated from time to time. This overview is prepared for information purposes only and shall neither be considered nor constructed as legal advice in any respect. No liability or responsibility is accepted as a result of the newsletter.