Last week marked the first week of the new P&I year - the policy year 2022/2023. The Norwegian P&I Clubs – Skuld and Gard – report increased and record renewals for the coming year. In this newsletter we provide a brief overview of the key amendments to their respective Rules for the new policy year. 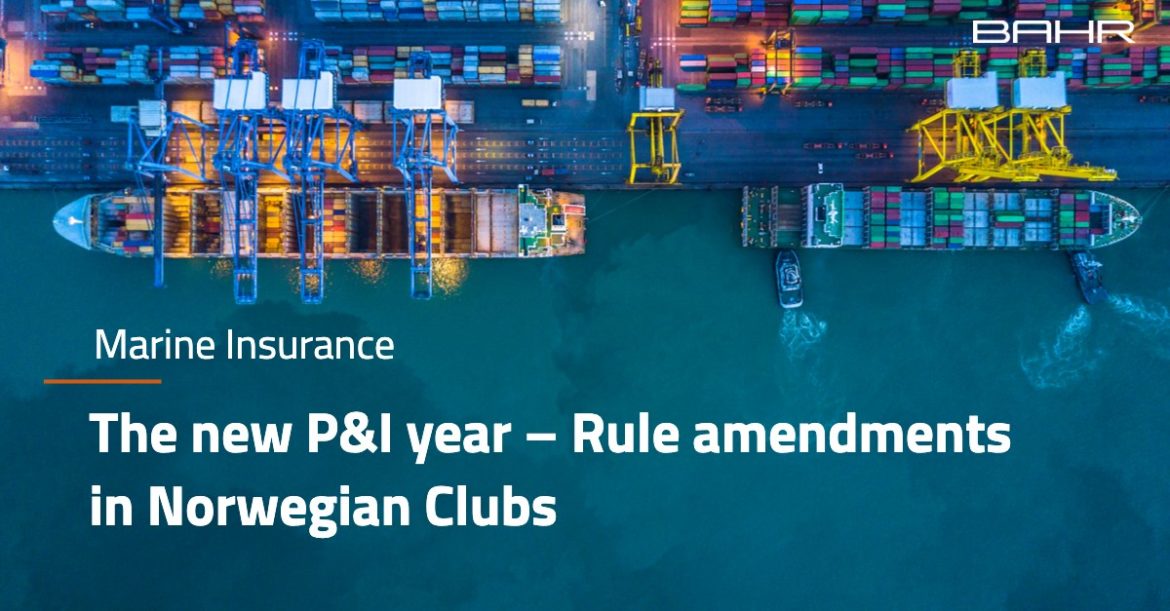 This year most amendments are primarily clarifications to the existing Rules. There are changes of more material significance however, which are prompted, not surprisingly, by sanctions and COVID-19. Some amendments have also been made which are of interest to offshore activities. The key changes in essence relate to termination due to sanctions, disinfection and quarantine, the clubs’ right to amend the Rules during the policy year, the clubs’ right to prioritise claims, and cover relating primarily to offshore activities.

Exposure to sanctions has been a serious concern for the clubs for years. In more recent years the use of sanctions has become more widespread and changed more rapidly, as well as becoming wider in scope and arguably more unpredictable. A proximate example being the current, unprecedented and daily evolving sanctions regime put in place on Russia (in response to the war in Ukraine). The uncertainty caused by sanctions in general necessitate a clear path out for the clubs.

The clubs have Rules on cessation of cover and termination should such situations occur, which add to the Rules excluding liabilities where payment may pose the clubs to sanctions exposure (see Skuld Rule 30.4.6 and 32.6 and Gard Rule 24.3 and 25.4).

For the new policy year, Skuld has updated its cessation provision, extending it to sanctions risk, under the new Rule numbering 3.1.8. The insurance cover ceases immediately and without notice in case an entered vessel is or has been engaged in any activity which may expose the association to risk of being or becoming subject to any applicable sanction (or similar action). Any cessation of cover may take effect retroactively (and from a point in time well in the past) if it is evidenced that the vessel has been engaged in activity that may expose Skuld to the risk of sanctions.

The COVID-19 pandemic has led to an increased focus on and need for all the clearer rules on infectious diseases, including rules specific to disinfection and quarantine expenses.

Although each club’s Rules have covered expenses from disinfection and quarantine already prior to the COVID-19 pandemic, the scope of cover has to some extent been diverging between clubs. The wording used by the International Group has been developed with the aim of clarifying the clubs’ scope of cover.

This year, Gard’s Rule 48 has a more clearly defined scope of cover in that the association covers “extraordinary” costs and expenses, in respect of “quarantine, disinfection, fuel, insurance, stores, provisions and port charges” which are “necessarily” incurred as a direct consequence of a quarantine order regarding the ship or crew. The Rule is also amended to clarify that the association reserves the right to refuse cover in a situation where the vessel has been ordered to a port where the member “ought to have known” (in addition to actual knowledge which is already part of the wording) that the vessel would be quarantined and/or would require disinfection. Furthermore, an addition has been made to clarify that cover for extraordinary costs/expenses does not extend to expenses for loss of time, loss of market, delay or similar.

Skuld’s Rule on the same matter, Rule 21, was aligned with the International Group wording prior to this year (materially, however strictly speaking not fully aligned in its wording to that of Gard) and no further changes have been made to that Rule.

The clubs’ right to amend the Rules during the policy year

Gard has long had Rule 92.2 allowing for amendments to the Rules during the policy year when a “substantial alteration of risk” has occurred as a result of new legislation or for any other reason. The member, however, retaining comfort in that any such change must be made by two months’ notice, dodging any nasty surprises.

This year, Skuld has introduced a similar Rule by adding a new second paragraph to Rule 2.1 (Conditions of Cover). The wording is materially similar to that of Gard and any such amendment will be approved by the Board and published with two months’ notice on Skuld’s website.

The clubs’ right to prioritise claims

There have recently been discussions within the International Group on the coverage of fines under Blue Cards and similar undertakings, as well as under general bail or security commitments. It has been argued in this regard that it would be advantageous for clubs to protect their position by establishing the right to prioritise direct liabilities over uncertified or similarly unsecured claims.

Both Gard and Skuld have addressed the issue this year (along with other IG Clubs). Skuld has added a new Rule 39.6 (Waiver and recovery) which introduces a mechanism allowing Skuld to, at its discretion, prioritise certified claims made under Blue Cards issued by Skuld (e.g. CLC, Bunkers Convention, Wreck Removal Convention, Reg 4.2 of MLC) as well as payments under guarantees or securities issued by the association, over claims not covered by Blue Cards or guarantees/securities provided by the club.

A similar Rule has been introduced in Gard’s Rule 88.4, pursuant to which Gard is given a right to prioritise claims where the association is obligated to pay directly to third parties under Blue Cards or LOUs, over claims for indemnification of the member.

Both the Skuld Rules and the Gard Rules contain exclusion of cover for certain types of operations, often specialised and not directly related to usual vessel operation, such as sub-sea activities (for example operation of submarines, diving bells and divers). The clubs have for the policy year 2022/2023 amended the respective Rules to extend the exclusion to remotely operated underwater vehicles (ROVs), to reflect the technological development and increasing use of ROVs, in line with changes to the IG Pooling Agreement.

In Skuld’s Rules, the accommodation for the change is made by an amendment of the definition of sub-sea activities in Appendix 1 (Definitions). The definition has been extended to include remotely operated underwater vehicles. Liabilities, costs and expenses incurred in connection with any claim brought against the members arising out of such activities are consequently excluded from cover under rule 30.3.2 (except under Rule 27 (Defence)).

An amendment to the same effect has been made to Gard’s Rule 61.

In 2019 and 2020, an exception from cover was introduced to both Gard and Skuld’s Rules as a result of an amendment by the International Group in the IG Pooling Agreement for liability arising in respect of personnel (other than marine personnel) on board accommodation vessels (employed otherwise than by the member) moored or anchored within 500 meters of offshore facilities. Reportedly, the exclusion proved less than ideal in practice.

This year round, the reference to the 500-meter exclusion has been removed altogether from the IG Pooling Agreement and has led to corresponding amendments in the clubs’ Rules, with the addition of cover being available for such personnel still, if there is a contractual allocation of such risk approved by the association. Skuld and Gard have chosen somewhat different wordings but essentially encompass the same intention.

Both Skuld’s Rule 9.2.2 (i) and Gard’s Rule 56 (a) has been amended to affirm that the exception relates to personnel where accommodation is being provided by the vessel to such personnel in relation to their employment with the offshore facilities, but the clubs differ in their wording of the exception from the exception (where cover applies). Skuld has restricted its wording to cases where a contractual allocation of the risk has been approved by the association. Gard, on the other hand, has added that such allocation must in any case be no less favourable to the member than knock for knock (still requiring the approval of the association). Both leaving to the club to decide what to accept, but Gard establishing a minimum threshold.

In order to be aligned with market practice, the group of persons that may be covered under protective co-insurance under the IG Pooling Agreement is extended to include a wider group of persons within the contractor’s assumption of responsibility, recognising the normal contract regime in the offshore industry with, knock for knock clauses with broad group definitions.

To accommodate for the change, Gard has made an amendment in Rule 78.5, extending the scope of potential protective co-insureds to, in addition to the Member’s contracting party and their subcontractors, other persons in the “Co-assured’s group”.

In Skuld’s Rules, an amendment is made to Appendix 3 (Overspill claims and calls) section 3.1 (Contractor’s co-assurance) adding persons in the “contractor’s group”.