Private Equity and Asset Management | Brexit: The end of the transition period is approaching

On 31 January 2020, the UK left the EU (Brexit) under the terms of a withdrawal agreement (Withdrawal Agreement) agreed with the EU. The Withdrawal Agreement granted the UK a transition period, during which negotiations on the future UK-EU relationship were intended to be held. The transition period will end on 31 December 2020 (Exit Day). The parties have indicated that a trade deal following such negotiations will have to be concluded on 15 October 2020 at the latest, in order for it to be implemented in time for Exit Day. However – we find that we approach Exit Day without firm indications that a trade deal encompassing asset managers and investment firms will be concluded between UK and the EU. Consequently, market participants need to prepare for what may happen on Exit Day. This newsletter deals with the regulatory landscape in Norway, as it stands, immediately following Exit Day should the UK and the EU be unable to conclude on a trade deal encompassing asset managers and investment firms. 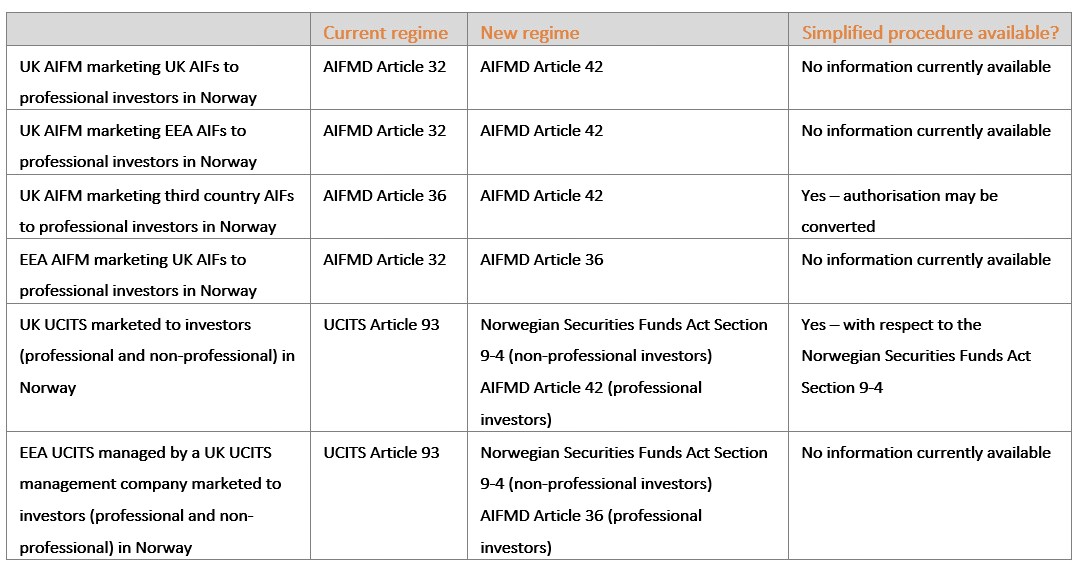 Separate agreement between the EFTA countries and the UK

The EEA EFTA states (Norway, Iceland and Lichtenstein) and the UK have signed a withdrawal agreement dealing with Brexit. The preamble to the agreement states that the rights and obligations under the EEA Agreement should continue to apply to the UK for the duration of the transition period (as set out in the Withdrawal Agreement) and that the parties shall put in place any necessary arrangements for such continuation.

On Exit Day, the UK will be regarded as a third country. Managers based in third countries are not eligible for the passporting regimes set out in the UCITS Directive or the AIFMD. On 4 April 2019, the Norwegian regulator (FSAN), made public a statement regarding the shift in the regulatory landscape that this will cause. The shift can be summarised as shown in the above picture

The FSAN has stated that it will not start processing applications until it is certain that the UK leaves the EU without a relevant trade deal. We expect the FSAN to issue information about a planned process for this shortly. The process will need to give fund managers time to prepare and submit the necessary applications to secure continuity for funds that are currently being marketed into Norway.

A temporary regulation which allows UK MiFID firms (but not insurance companies and credit institutions) to continue providing cross-border services to per se professional clients in Norway after Brexit is already in place. As long as the transition act mentioned above remains in place, the temporary regulation does not really add anything in terms of UK MiFID firms’ rights to conduct business in Norway.

The million-dollar question is what happens to this regulation on Exit Day, but unfortunately it seems no decision has been made regarding that. Our best guess would be that the temporary regulation is kept in place for a short period of time in which firms can apply for the necessary authorisations in Norway.

The temporary licensing relief will most likely not have any effect at Exit Day, as it was designed for a no-deal Brexit on 31 January 2020. It remains to be seen if Norwegian authorities will provide additional transitional rules for UK insurance companies.

No transitional licensing rules have been proposed for credit institutions or other financing undertakings. It remains to be seen if Norwegian authorities will provide any transitional rules leading up to Exit Day.

Brexit will introduce somewhat higher cost to access the Norwegian market for UK funds and fund managers. All else being equal, this would entail that fewer products will be marketed to Norwegian investors, and that they will have access to a smaller offering of products.