The Nordic Offshore and Maritime Arbitration Association (NOMA) has introduced a set of new Fast Track Arbitration Rules with the purpose to facilitate for faster and less expensive arbitration proceedings for disputes involving smaller and less complicated claims. 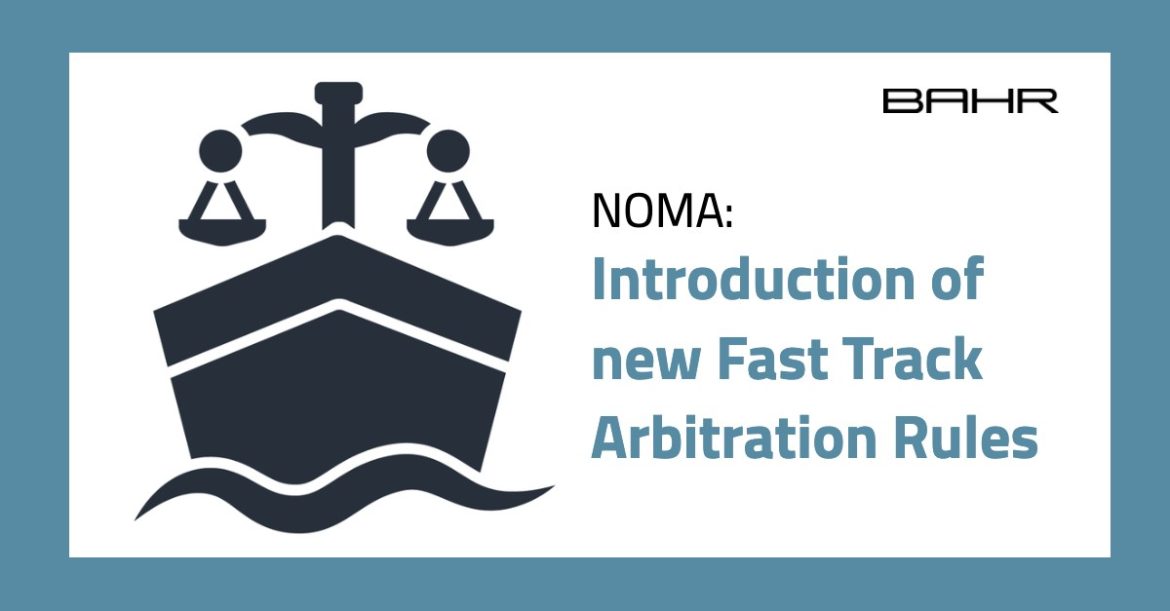 A working group was established within the Norwegian part of NOMA in October 2018 to consider and draft a set of rules. Members from BAHR, together with Wikborg Rein, Schjødt and Nordisk Skibsrederforening have contributed to the development of the rules.

The work resulted in a set of stand-alone rules based on an opt-in solution, which was adopted by NOMA 1 April 2021. The Fast Track Arbitration Rules are available at NOMA’s web site: https://www.nordicarbitration.org/

The NOMA Fast Track Arbitration Rules shall apply when the parties have expressly agreed so in their dispute resolution clause(s) or otherwise, and where the aggregate amount of the claim and/or counterclaim of a dispute does not exceed USD 250,000.

As the main rule, the arbitration panel shall consist of a sole arbitrator, and the proceedings shall be conducted on the basis of documents only without an oral hearing. The final award shall be made no later than 6 months after commencement of the arbitration.

Time limits are shorter than for the ordinary arbitration rules, inter alia for appointing the arbitral tribunal and for submitting statements. Furthermore, the parties may not submit more than one written statement each in addition to the statement of claim and the statement of defence. The fees of the arbitral tribunal are subject to separate caps, and shall as the starting point be capped at 5 % of the disputed amount, however not less than USD 10,000.

The set of rules included in the NOMA Fast Track Arbitration Rules is quite comprehensive, and the rules also allow the parties flexibility, by for example allowing the parties to agree on a tribunal of three arbitrators, or that an oral hearing shall be held.

The ordinary NOMA Rules, first introduced in 2017, have proven to be popular within the industry. The new NOMA Fast Tract Arbitration Rules provides a welcomed addition to the NOMA Rules that we expect will be equally popular over time, in particular for claims of a smaller value.

Do not hesitate to contact any of BAHR’s shipping or regulatory team members for further information.